Money will be used to fund animal shelter building in Humboldt 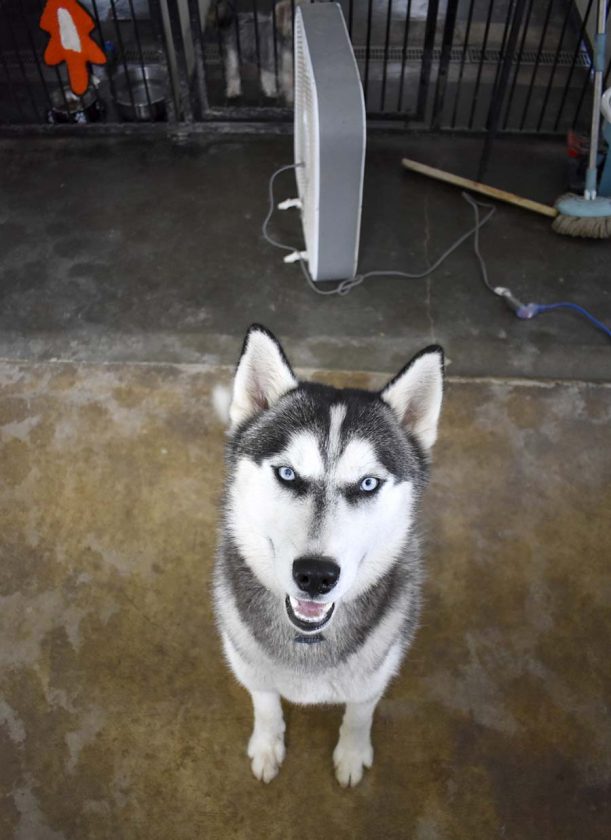 -Messenger file photo by Elijah Decious Dogs like Levi, a husky mix surrendered by his former owner, will have plenty of space in a new animal shelter to be built in northwest Humboldt. The construction will be funded by Mary Moffitt who made a $250,000 donation.

HUMBOLDT — An unexpected generous donation will fund a new animal shelter building in Humboldt and help ease the minds of animal lovers in that community, according to Pat Hill, a member of the Humboldt Community Animal Shelter’s Board of Directors.

Hill said a donation of $250,000 will be given by Mary Moffitt to the Humboldt Community Animal Shelter.

The announcement was made official on Friday. The new building will provide a sanctuary for cats and dogs.

“The board is just ecstatic about it,” Hill said. “We are looking forward to being able to get them in and take care of them and adopt them out if nobody claims them.”

Moffitt owns farmland on the outskirts of Dakota City, but lives in California. She visits the Humboldt area every so often throughout the year.

“She just loves animals,” Hill said. “She’s kind of a big cat lover. She (Moffitt) brings her cat with her on the plane when she comes to Iowa.”

Humboldt City Administrator Travis Goedken, who is also a member of the Humboldt Community Animal Shelter board, said the donation helps put the board’s plans on track.

“We have been working for about a year on solutions,” Goedken said. “We have had our struggles, no doubt. To have this donation come forward makes things so much easier.”

The animal shelter, which will bear Mary Moffitt’s name, will be located in a lot in northwest Humboldt.

Gronbach Construction, of Humboldt, will be doing the work.

“The board had been hoping to secure a large shelter for some time,” Goedken said. “But we were not anticipating getting this kind of help.”

“I am glad I was sitting down when I received word of the generous donation,” Cordray said. “After receiving the news I happened to see the quote that,’generosity is compassion in action.’ To me, it’s obvious that Mary Moffitt has a big heart for animals.”

Although Cordray has never met Moffitt personally, she is grateful for her contribution.

Cordray is one of two veterinarians who serve on the Humboldt Community Animal Shelter board. The other is Erin Kramer, of Harmony Animal Clinic.

“Both of us are members and we are in this together,” Cordray said.

Cordray said being able to build a new facility for animals fills a huge need.

“I have seen many homeless animals come through my veterinary clinic and therefore I have seen the need myself for our community,” Cordray said. “This donation just makes it a reality. We can put our plans into action that much sooner.”

Cordray became a veterinarian to help animals through difficult times.

“I like getting to see the before and after,” she said. “It’s unfortunate when they come in sick and needing help, but your heart is fulfilled when you see them healthy and in a good home.”

Hill said a groundbreaking ceremony will be held in the coming days before Moffitt heads back to California.

According to Hill, the Humboldt Community Animal Shelter estimated the new building to cost in the range of $240,000 to $250,000.

“This pretty much pays for the whole building,” Hill said.

The shelter also received donations from 100+ Women Who Care and the Humboldt Lion’s Club.

Hill said those contributions will be used on the interior of the shelter for things like beds, a quarantine area for sick animals and a meet and greet area.

The city of Humboldt and Humboldt County have each committed to $7,500 in funding for the shelter.

The county is willing to provide an additional $2,500 in matching funds if other cities contribute, according to Goedken.

The Humboldt Community Animal Shelter board will meet Thursday at 6:30 p.m. at Humboldt City Hall to discuss operations of the shelter.

Merri Hansen, who was the director of the shelter, was terminated in July. The board has not yet found a replacement.

“Our efforts have been focused on the building and the financing,” Goedken said. “That was priority one. This was a gift that makes it that much easier. Priority two is solidifying the operations of it.”

Choosing the Mid-Iowa Region for Your Business.